Pilton has just lost a leading light.  Hamish Patrick, a founding member of the Pilton Green Man Festival and a staunch supporter of local charities, died suddenly on 7th December.  With a background in the theatre, he moved to North Devon 30 years ago and was a huge influence in the Pilton community.  His dream was to turn the tide of communities becoming fractured when children grew up and went away to find work.  He believed that if we created a strong bond within a community, the children would come back at least to visit and to keep those ties.  25 years later our children have grown up but few can stay away on Green Man Day in July; some are even on the committee and making it happen today.

Hamish worked tirelessly to get over 20 pantomimes onto the stage, and on creating and developing the Festival – in particular directing the Green Man Pageant.  In recent years he laboured long and hard with his team of supporters to organize the lovely family friendly haven that just seemed to magically spring up in Rotary Gardens on Green Man Day.  The photograph below shows him as the Prior in the Pageant. 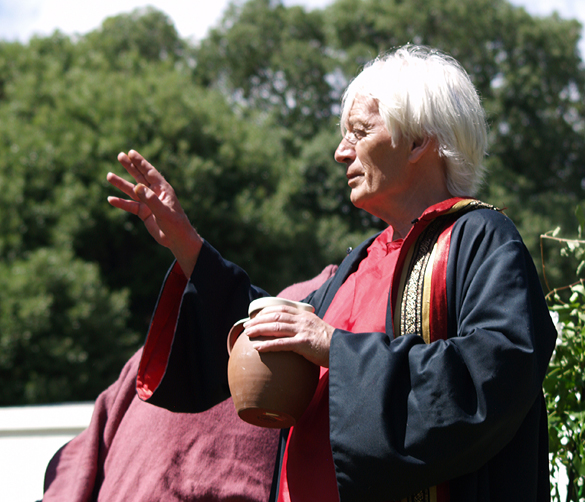 On 22nd December, a crowd of over 500 people lined Pilton Street to say ‘Goodbye’ to Hamish in a spontaneous gesture, demonstrating the warm regard in which he was held.  He will be sorely missed.

Thanks to Bev Neighbour for her contribution to this memory.