Themes - ObjectsLearning more about the past

As well as using documents, images and oral testimony, we can also use objects (or artefacts) to help us learn more about the past. An object used by people in the past is known as an historical artefact, e.g. a child’s lunchbox of the 1980s, a 1960s mini-skirt, a 19th Century pitch pipe (see photo) and a 15th Century Prior's Seal are all historical artefacts. Each is illustrative of aspects of the lives of the people who made and used them. The pitch pipe, in St Mary's Church, was used by the Parish Clerk to give the key-note of a hymn before there was a band or organ available, probably from the early 19th Century. 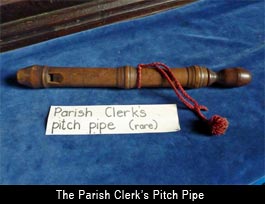 Pictures, documents, books, pottery and metalwork and now also electronic records are artefacts which may help us understand the history of Pilton.

We think this is a late-Victorian or Edwardian travel doll. It's plastic legs and feet probably date it around the end of 19th Century or beginning of 20th Century. It was found under floorboards in 108 Pilton Street, Pilton, Barnstaple by Lesley and Mike Passmore (to whom thanks for bringing to The Pilton Story).

If anyone can help with identification of who made it and when and what the significance of the costume is, we would love to hear from you through this website. 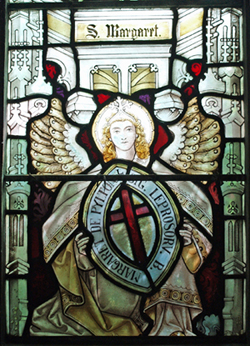 The Church of St Mary the Virgin at Pilton possesses eight large stained glass windows dating from the late19th or early 20th Century.  They are much admired for the beautiful tracery and richness of colour: azure and crimson, green and orange. Read all about these in the document by Reginald Norman of Pilton The Stained Glass Windows of Pilton Church.

There is a memorial window to Mr Townshend Hall, at one time the Patron of the living of Pilton. The window illustrates the return of the healed leper to Christ, with, in the side light, figures of St. Luke, known as 'the beloved physician' and St. Margaret, the patron saint of the ancient Lepers’ Hospital at Pilton.  Beneath the last figure an angel holds a replica of the ancient seal of the Hospital (left), the only impression of which is now in the North Devon Athenaeum.  The 12th Century Hospital stood at the bottom of Pilton Street on the site of what is now St. Margaret's Terrace.  The seal itself was lost early in the 19th Century.

The Pilton Story will identify and record such historical objects as this, hopefully explaining their role in the history of the village.

Go to the Submit Form to get in touch with us about stories of Piltonian objects of interest.