It may still be seven weeks until the 2012 Pilton Green Man Festival, but Jubilee weekend is a chance for some nostalgia for when it all started.  On Saturday 2nd June (12.30 to 5pm) there will be a Family Picnic in the grounds of Bradiford House – the scene on July 10th 1982 of both a Gypsy Fayre (afternoon) and a Gypsy Barbecue (evening). 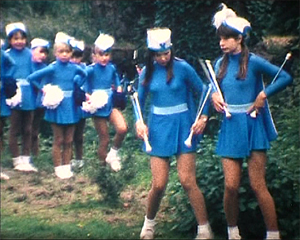 Taking part in the afternoon event were the Bickington Bluebirds Majorettes (left) who also appeared in the 1982 film of the first Pilton Festival made by the late Clifford Davies (showing in Pilton Church Hall at 4pm on Monday 4th June). It is hoped that some of those who appeared will be back in Bradiford to remember this event of their youth.  We were pleased to discover they still exist. 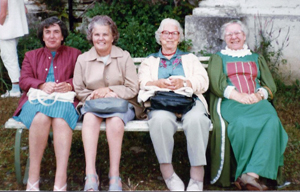 Enjoying the Gypsy Barbecue at Bradiford House in 1982

Some ladies who sadly will not be back in Bradiford this year (although Joan and Dora still live in Barnstaple) are shown here sitting in the garden at the Gypsy Barbecue in 1982: from left to right – Mrs Joan Tancock, Mrs Dora Tancock, Alice Mogridge, Mrs May Nott (formerly Mrs May Brannam). Photograph from Mary Passmore.  At the 2012 Family Picnic the visitors can watch the Pilton v Bradiford Tug of War for the new Jubilee Cup, take part in children’s races and enjoy beer, cider or Pimms.  Anyone can come, but there is very limited parking so people should walk if possible. 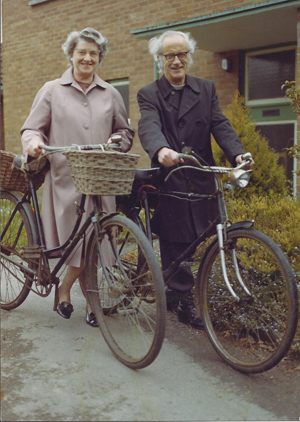 The Rev James and Mrs Connie West were often to be seen around Pilton on their bikes between 1956 and 1981.

In a little over two months, The Pilton Story Archive has already collected over one hundred separate items and they continue to come in.  Subjects range from the commemoration of Haile Selassie to rugby matches between police and firemen, from performing dogs to amateur pantomimes and from cycling mole catchers to cycling vicars.  Viewing all these online is easy enough, but there are many people who prefer their photographs printed.  And looking at them can be a much more social activity than sitting in front of a computer screen.

So we are starting a small group of people to help us with the preparation of albums of the more interesting archive material which can be used at events like the Drop In on Sunday 3rd June in Pilton Church Hall (2 – 5pm),  If you would like to help with this fascinating aspect of The Pilton Story Project please contact us.  All you need is the ability to stick double-sided tape on the backs of photographs – and to drink tea and chat.