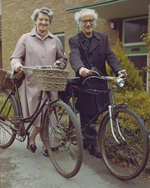 The Pilton Story archive has been active since February 2012 when the database of Pilton stories was created by Paul Willcox.  A brief analysis of the content of the archive has given a small insight into the particular interests of the people of the village of Pilton in their more recent history.

In the six months that the archive volunteers have been uploading photographs and documents, 161 entries have been made, the vast majority pictures.  Indeed 109 are pictures, 44 are documents (many including or based on pictures), 5 are audio recordings, 2 are YouTube videos and 1 is an archive video.

The Top Ten entries viewed on line are:

and coming up fast in the ‘charts’, after only being posted in early August 2012, is The View from Pilton House at Christmas in 1916.  You can follow the links on each of these to the archive and see what everyone was keen to read about.  And if you select the ‘Most Viewed’ in the filter on the Archive Home Page you can see what else got people interested.  If you have a story to tell or would like to be involved in the archive, please contact us.