Laurie Wedge, the Green Man on stilts who graced Pilton Festival for 15 years, has died, aged 63. Many thousands of people saw and enjoyed Laurie’s deep commitment to the festival. 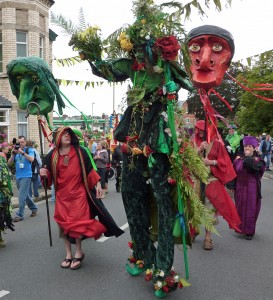 Laurie as the Green Man reaches Pilton with the parade

No-one could miss his giraffe-like walk through the crowd, ten-feet tall dressed in a spectacular plant and flower costume, sprinkling everyone he could with rose petals and offering them a green blessing. 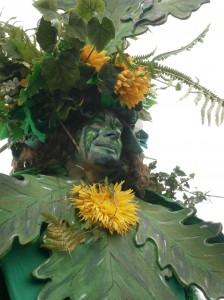 “Pilton Festival, and the Green Man, was the highlight of his year,” said his partner, Teresa Price. “It represented what he believed in. He’d spend a lot of time preparing for it, arranging his costume and collecting the rose petals. He really loved what he did on the day.  It was about fertility and abundance.”

Laurie came from London where he learned stiltwalking and other circus skills alongside Abi Falkner of South Molton, with whom he had two children, Robin, 15 and Elsa, 9.  Abi said: “He really was a very authentic and appropriate choice for the Green Man, as he loved nature, gardening and growing things. His long terraced house garden in Larkhall Lane (London) was absolutely bursting with plants, everything from a huge wild cherry tree to small bonsai trees in pots. Every window sill was chockablock with plants he had grown from seeds, lemon plants, passion flowers, pine cuttings and all sorts.
The Green Man was the first costume he put together.”

Bev Neighbour, of the Pilton Festival, said: “Pilton Greenman Festival welcomed the new addition of Laurence in his fabulous Green Man guise around 2001.  He took the Festival parade through Barnstaple to a new level of entertainment for the hundreds of people who witnessed the spectacle.

“Laurence led the parade in magnificent style, all the way from the Square, up the High Street, along Pilton Causeway and right up Pilton Street.

“He would then spend the rest of the day on his stilts, sprinkling magic dust and flower petals and bestowing good spells and omens upon the heads of adults and tiny children who gazed up at this fascinating man in awe.

“Despite his own failing health Laurence turned out, in full costume and on his stilts, to show his respects by leading the procession when Hamish Patrick’s hearse was seen out of Pilton by festival folk in January last year.

“He will be very sorely missed by everybody involved with Pilton Festival as well as many who attend the day.”

In 1985 Howard Bluett, a Lay Reader at St Mary’s Church, filmed the Pilton Playgroup in Pilton Church Hall.  We have now successfully transferred the 30 minute video to a digital medium and, with the help of one of the mothers involved, Anne Chapman, we have managed to identify over 70 of the leaders, parents and children who are shown. 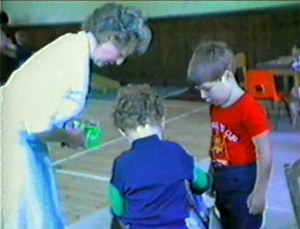 Playgroup Leader Dorothy Forward with two of the children

It was too big a task to go through and identify them on the film but they are all listed on The Pilton Story archive (search for ‘Pilton Playgroup’).  We hope this means that anyone searching the internet for themselves or members of their family may find The Pilton Story and open up links back to their time in Pilton.

The Leaders were Dorothy Forward (shown in this image from the film with two of her charges) and Brenda Bryan, and they were helped by Elizabeth Stevens, Ruth Dennis, Jean Ford, Sheena Ferguson and Nancy Bluett (Howard’s wife) and a lot of the children’s parents.  If anyone would like to add to what we know about this group and tell us what they are doing today, please contact The Pilton Story.