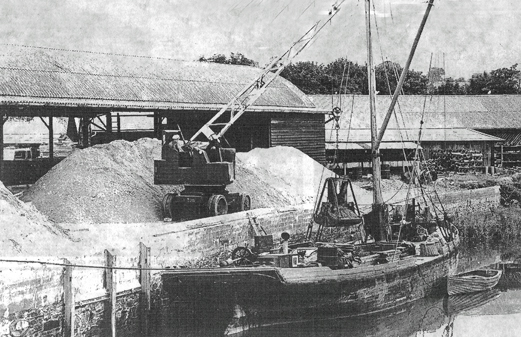 As recently as the late 1960s, wooden barges were still being used to bring building materials to Rolle Quay by Pilton-based builders’ merchants Rawle, Gammon & Baker (known to all as RGB).  From when RGB were established in 1850, when logs had to be hand-sawn into planks in a deep sawpit, these wooden barges were an essential link in the supply chain of North Devon.  Large vessels of up to 600 tons would bring their cargoes of trees from North America and unload them in Appledore Pool.  Using barges or rafts or even simply floating them, the logs would be moved up the River Taw and into the River Yeo to be lifted out opposite the Rolle Quay Inn into the RGB Yard. 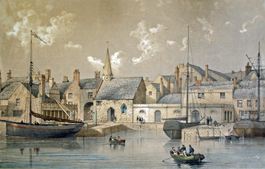 The 'John & Ann' at Barnstaple Quay

Wooden barges carried all types of materials to and from Barnstaple at a time when the roads were just too poor for heavy transport.  Indeed, in 1853 three of the old bells of St Mary’s Church, Pilton, were taken away to Loughborough by sea to be re-cast by John Taylor & Sons and for two new ones to be made.  They were brought back to Pilton Quay via Bristol in 1854 by the sailing smack ‘John & Ann’ (shown in this lithograph reproduced with the permission of the North Devon Atheneum). The five bells were then hauled up Pilton Street on sledges and manhandled into the church tower which had only just been completely restored after its destruction 200 years before during the English Civil War.

A Brief History of RGB will be available in The Pilton Story archive shortly.