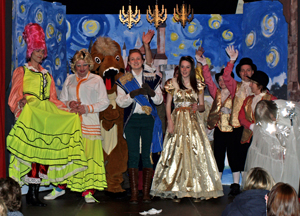 The Pilton Panto came back in  2013 after missing a year with a sparkling production of CINDERELLA in The Green Man Inn from 22nd to 26th January.  Both adults and children were welcomed to what was, as usual, a brilliant traditional village event.  What’s more it had returned to its earlier stomping ground, the Green Man Inn (formerly known as The Chichester Arms) after an absence of several years.

Sellout performances and a great raffle response meant that it was able to raise money for Pilton Festival as well as Pilton Church Hall and the North Devon Hospice.  Over the years it has raised tens of thousands of pounds, always for good local causes.  We will publish the figure for 2013 as soon as it is available. 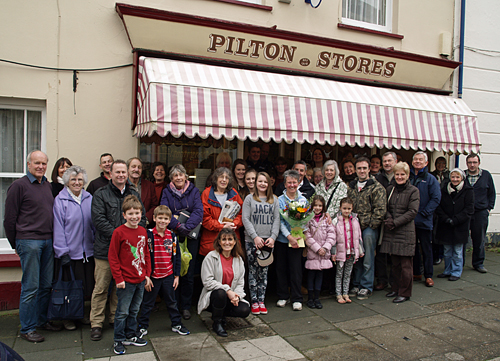 Pilton Stores has closed its doors after more than 100 years as a grocery shop and delicatessen. Latest owners Heather (in the centre of the picture with flowers) and Geoff Dwyer (unfortunately away on the day) retired on Saturday 12 January 2013 after running the shop since 1989.  A large group of Pilton residents gathered just before the final close to say ‘farewell’ and present Heather with flowers and a gift.  The closure brings to an end an important era for the community of Pilton.  The village stores, which has been one of the focal points of the community, will be sorely missed.