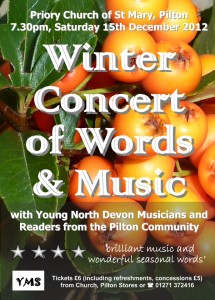 The original 1982 Pilton Festival included two concerts in Pilton Church.  Since then there have been many concerts in the Church.  In 2008, as part of the efforts to raise money for the critical Repair of the South Porch, Carol Haddrill organised a concert with music played by Young Musicians interspersed with readings by people from the Pilton community.  The story of this concert is included in the archive as the Summer Concert 2008.  The Summer Concerts were repeated in 2009, 2010 and 2011 at the end of the Pilton Festival weekend.  The music came from some of the most talented young musicians of North Devon who welcomed the opportunity to play in front of a real audience.  The readings always followed a particular theme – like ‘Summer’, ‘Man on Earth’ and  ‘Man and the Animal World’.  In 2012 it was decided to organise a Concert in December, again in Pilton Church, with the theme of Winter. 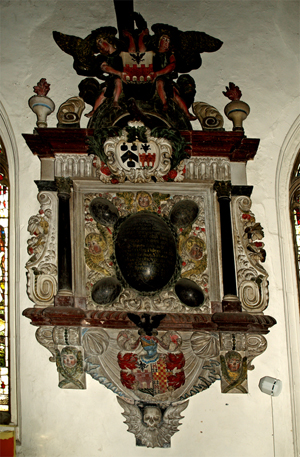 The Lethbridge Memorial is an immense limestone monument in St Mary’s Church, Pilton, which is to undergo significant refurbishment in December 2012.  It was put up almost 300 years ago by Margaret Bouchier principally in memory of her husband, Christopher Lethbridge, who died in 1713.  Christopher Lethbridge was the son of a clergyman, John Lethbridge, who was ejected as Rector of Ashprington in South Devon for being a Royalist.  The family lived locally at Westaway House in Pilton.

By far the largest and most impressive wall-mounted monument in the church, it is part of a group from the late 17th and early 18th Century, characterised by experts as ‘Barnstaple work’.  It suggests that there was a thriving and artistically ambitious workshop in Barnstaple at the time.

To learn more about the detail of the monument, follow this link to The Lethbridge Memorial in The Pilton Story Archive.