In 1867 a ring was found in a ball of clay buried close to Pilton Churchyard.  Inspection by the British Museum revealed it to be ecclesiastical and dating from the early 12th Century.  The suggestion is that it was given to the Pilton Prior by the Abbot of Malmesbury Abbey, when Pilton Priory was founded in around 1185, and was subsequently hidden in the ball of clay under a sapling when the Priory was dissolved by Henry VIII in around 1535.  It is a mediaeval gold ring, set with a cabochon sapphire surrounded with a bezel engraved with a Hebrew inscription translated as ‘May Jesu Emmanuel Jehova be with us’, and on the reverse, in Latin ‘Lord Jesus be with us’. 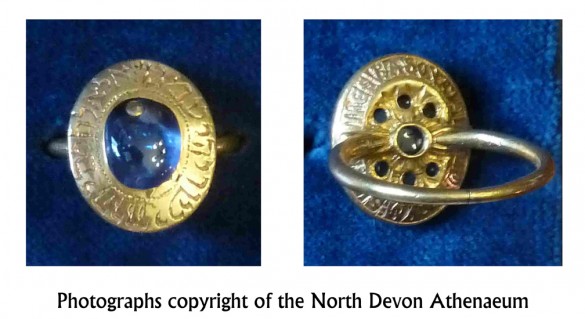 The ring was presented to the North Devon Athenaeum in 1976.  Follow this link to The Prior’s Ring to read the whole story.  The ring can be seen in the Dodderidge Room in Barnstaple Guildhall which has recently been opened to the public on the second Sunday of each month.