A SET of photographs more than 100 years old have revealed an intriguing picture of farming in North Devon in Victorian times.  One of the pictures was featured in a North Devon Journal story explaining how the Devon County Show was held in the grounds of Pilton House on land now used as public gardens and where the main North Road out of town was later built.

Farmers parade their cattle in the grounds of Pilton House, 1900

The date is 1900 and exhibitors parade their cattle, all horned, for the judges.  Two other photos show a big crowd of suited men and women in elaborate hats, and a display by military horsemen.

The show will have been made possible by the grandfather of Pilton resident Cherry Pearce, who brought the photos to The Pilton Story archive of documents, photos and items collected by local people.  Her grandfather and father were both called Charles Pearce and owned the grand mansion, Pilton House, now a residential home.

The Devon County Show records, compiled by Chris Smith, former press officer of the Devon County Agricultural Association, reveal that hundreds, possibly thousands of people, travelled to Pilton in 1900 for the big event.  The Western Times reported: “The Devon Agricultural Society never had a more hearty and enthusiastic welcome than the reception which Barnstaple offered it on Wednesday, the opening of the three day annual exhibition of horses, cattle, sheep, pigs, butter and agricultural implements.”

The paper went on to describe Barnstaple being decked out with “decorations which included 24 triumphal arches bearing appropriate mottoes and illustrations”.  The square was also fitted up with a “scheme of electrical illuminations making that part of the town a centre of attraction in the evening”. Before the grand opening, the president and officials were invited by the mayor to a toast and ale function at the guildhall and the Western Times reported “goodwill abounded as people looked forward with hope to the new century”.

The Devon County Agricultural Association was formed in January 1872 and the show was held in different parts of the county every year. Among the venues before World War I were Plymouth, Barnstaple, Newton Abbot, Tiverton, Tavistock, Honiton, Crediton, Bideford and Torquay. 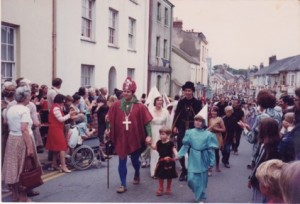 Ian Thomas as a Bishop with his children Kate and Andrew

Ian Thomas, Deputy Headmaster of The Bluecoat C.E. Junior School, Pilton from January 1978, got involved in the Rev. Anthony Geering’s idea of resurrecting Pilton Festival in 1982 – an event with its roots in the 1344 granting of the right to hold a market by Edward III.  With Anthony Geering, Albert Linacre and Noel Harley, Ian formed the core of the first Festival Committee.  On The Pilton Story archive now is a short memory of his personal involvement in the first few years of the Festival.  Read more in Pilton Festival : The Early Years by following this link.  It tells us a little about how Pilton Festival became what it is today.