Deep Snow in Pilton Street in 1924

This is an original pen and ink sketch of Pilton Street in deep snow by Bruce William Oliver of Barnstaple probably dating from the winter of 1923-24. Bruce Oliver was a prominent architect in Bideford and Barnstaple, who had a keen interest in local history and was closely involved in the North Devon Athenaeum. His collection includes several architectural notes on various places within North Devon as well as drawings and watercolours under the name Roland. There is also a collection of his photographs and slides within the Image Collection of the Athenaeum. He was Mayor of Barnstaple in 1931 and his portrait by an unknown artist hangs in the Guildhall in the centre of the town. He was born in 1883 and died in 1976.  This pen and ink sketch was presented to The Pilton Story by Roy Barnes from the estate of Phyllis Allen, Roy’s aunt. 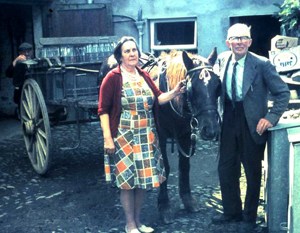 Mr and Mrs Chammings and their dairy horse and cart

Arthur and Gwen Chammings of Bradiford ran a dairy from Hume Farm on the road to Anchor Mill.  This photo shows them in about 1972 when their horse may have been called ‘Dot’.  On an earlier photograph in 1965 (see link below) the pony is reported as being called ‘Dolly’.  The man in the background, behind the cart, is also thought to have been called Arthur and worked for Hume Farm.

Memories of the Chammings include them delivering milk by the jug in the 1950s with milk churns on their cart and then changing over to gold top and silver top bottles. They used 2 pint bottles and then used to foil seal the milk bottles by hand with a little gadget.

The 1965 photograph can be seen by clicking on the following link Chammings Dairy Cart in 1965.  Many thanks to Michael Abbott for the photograph above.