On 9th September Ian Thomas, Deputy Headteacher of Pilton Bluecoat School from 1978 to 1997, and his wife Sue Thomas, who became School Secretary during that time, visited The Pilton Story from their home in North Yorkshire.  In 1982, Ian got closely involved in the Rev. Anthony Geering‘s idea of resurrecting Pilton Festival and, with Anthony, Albert Linacre and Noel Harley, he formed the core of the first Festival Committee.  Those of you who have seen the film ‘Pilton Festival 1982‘ will know that Anthony Geering turned up dressed in green – like Robin Hood.  But, added to the carving in the Church, the idea caught on and, as they say, “The rest of the Pilton Green Man Festival story is history”. 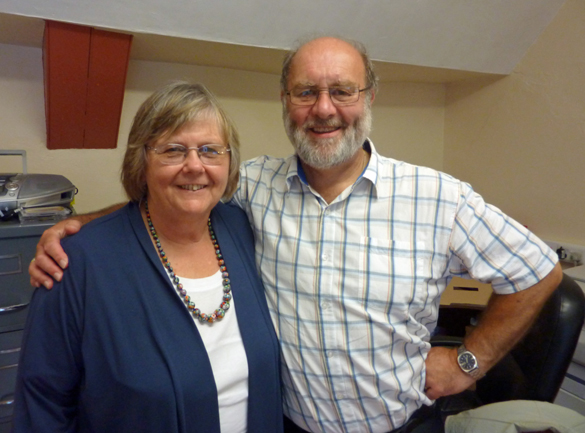 We will be posting a short interview with Ian talking about that first Festival on The Pilton Story in the near future.  In the meantime, he has written about ‘Pilton Festival : The Early Years’ which can be read on the archive by following that link.

About 100 years ago, the Barnstaple Conservative Association held its Annual Fete on Pilton Lawn in front of Pilton House. From the clothes in this photograph, the date appears to be Edwardian (up to 1910 when Edward VII died) or between 1910 and 1914, but we would be happy for any further suggestions on the precise date.  At the table on the left is May Pearce, daughter of Charles Pearce of Pilton House, who was born in 1893.

We have to thank Sue Pearce, Charles Pearce’s grand-daughter-in-law who was married to his grandson Arthur Richard Blackford Pearce and known as Dick, for this photograph.