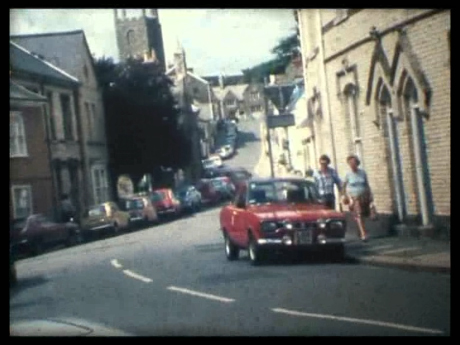 View up Pilton Street in June 1982

Pilton Festival in Barnstaple, North Devon, started in 1982 following the arrival of the Rev. Anthony Geering as Vicar of St Mary’s Church, Pilton.  Together with Ian Thomas, Albert Linacre, Noel Harley and others, he started what has now turned into the annual Pilton Green Man Festival. Click here to see a short video is of a discussion with Ian and Sue Thomas, who lived here in the 1980s, when they visited Pilton in September 2013.  Ian was interviewed by Martin Haddrill and Sue Thomas, Pet Harley, Liz Eveleigh and John Norman were all  involved in the discussion.  It gives a good idea of how the Pilton Festival first came about and how it took place again in 1984 and 1986 and then went yearly in 1988 after the Easter Festival organised by the Horse & Bamboo Theatre Company in 1987.