The history of theatrical productions in Pilton Church Hall goes back to at least 1923-24 and the play ‘Oliver’.  There’s a photograph on the archive.  The last play produced there was Noèl Coward’s ‘Blithe Spirit’ by Lord Basil’s Reformers in the autumn of 2014 and they also performed for a very successful Murder Mystery Evening ‘Who Killed the Hotel Manager?’ in December 2015. 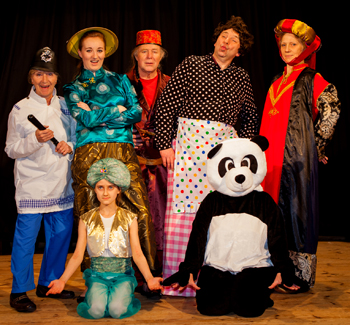 The last pantomime produced in Pilton was ‘Cinderella’ in 2013 in the Green Man – but now Pilton Panto is back in its old home – Pilton Church Hall – being produced by Pilton Theatre Productions.  The plan is to put on a panto every February Half Term and this year’s is ‘Aladdin’, adapted and directed by Lee Smith.  It can be seen from 18th – 20th February.  This first production is being financially supported by the Pilton Green Man Day Committee and details of times and tickets can be found on www.piltonfestival.co.uk.