George Laity of Pilton, formerly of the 231st Brigade, was one of four World War II heroes awarded the French National Order of the Legion of Honour (Ordre national de la Légion d’honneur) at an emotional ceremony at RMB Chivenor, North Devon, on Wednesday 13th April 2016. 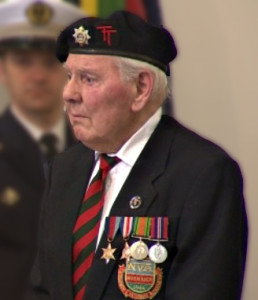 The equivalent of a knighthood, France’s highest honour was awarded in recognition of their part in the D-Day landings in 1944 which led eventually to the liberation of France from the Nazis.  The medals were presented by Alain Sibiril, French Honorary Consul to the South West.

With George Laity were Len Husband and Clifford Coates from Bideford and Dennis Small from Fremington.  A medal was also presented to the widow of Norman Johns of Instow, who died in January this year, and to the daughter of Bob Harding from Bideford, who was unable to attend the ceremony.  These men are the latest set of veterans to be awarded the medal since French President Francois Hollande promised to honour all Britons who had served in France during the World War II.

Thanks to ITV News West Country for the photograph.

The fields of Manning’s Pit in Pilton have been walked and played on by local people for hundreds of years.  The area is beautiful, a magical piece of North Devon countryside within easy walking reach of town.  The people of Pilton hold these fields very close to their hearts. Many tell tales of their parents, grandparents and even great grandparents playing there.  It offers a safe and natural playground to a new generation of children.  Until recently Manning’s Pit was owned by a local farmer – who allowed free access – and the local population respected his need to graze animals on the land. 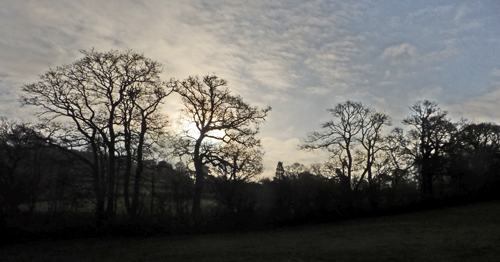 But now Manning’s Pit has been sold to London-based speculators who are interested only in forcing through planning permission for a housing estate so that they can sell the land on to a developer for a huge profit.  A petition has been started by the Friends of Manning’s Pit to demonstrate to the speculators just how strongly local people feel about their land.  A short film “The Magic of Manning’s Pit” can be watched at: www.vimeo.com/togetherland/MagicPit.  It has been made to record the wonder of Manning’s Pit.